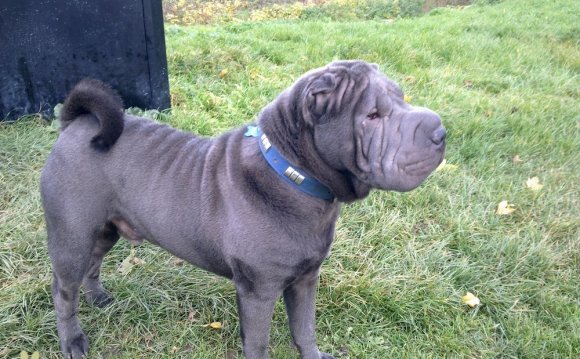 Shar-Pei are very loyal to their handler, intelligent playful, active dominant, and brave. They bond with their family, but are not unfriendly toward strangers. If the dog meets cats and children while they are still young, they usually will not have a problem with them. It is important to socialize puppies when they are very young. The Chinese Shar-Pei is easy going, calm, independent, and devoted. They make a delightful companion and good watchdogs. One must be a confident handler. If you are uncertain, inconsistent, too soft, or mild, in the dog’s eyes, it will take over as the boss. The Shar-Pei needs a firm, but gentle, extremely consistent authority figure. The dog must be taught that all humans are above him in the pecking order. This breed needs firm obedience training to establish your leadership. They may refuse commands from family members who have not established leadership over them. They need an owner who has the ability to be the boss. Shar-Pei are generally not fond of water and often try to avoid it. This breed is very clean and one of easier breeds to housebreak. Socialization is very important. Some Shar-Pei are less dominant than others and tend to be less dog-aggressive, mixing well with other dogs.

Because of its fame after being introduced to North America in the 1970’s the breed suffered much inexperienced or rushed breeding. This resulted not only in a dramatically different look for the Shar-Pei but also in a large number of health problems.

Allergy-induced skin infections can be a problem in this breed and Familial Shar-Pei fever (FSF) is a serious congenital disease that causes short fevers lasting up to 24 hours, usually accompanied by accumulation of fluid around the ankles (called Swollen Hock Syndrome). These fevers may or may not recur at more frequent intervals and become more intense. Amyloidosis, a long-term condition, is most likely related to FSF, caused by unprocessed amyloid proteins depositing in the organs, most often in the kidneys or liver, leading eventually to renal failure. To date there is no early test for FSF, but as it is congenital, the dog is either born with it or without it, and if one attack occurs the dog will always be susceptible to another. With proper care a Shar-Pei with FSF can live a completely normal and long life. Life expectancy...