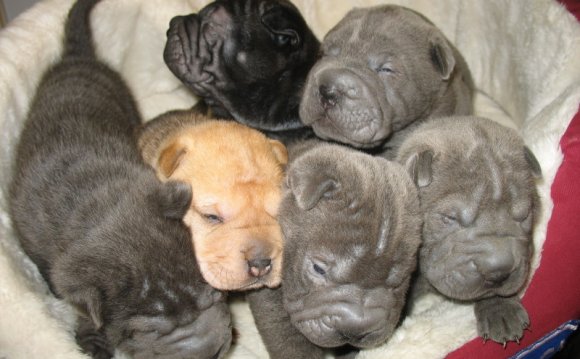 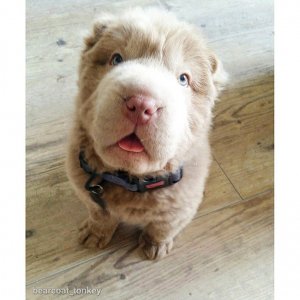 Tonkey Bear, the Shar-Pei puppy with the cutest face, is the Internet's new obsession - see photos of the adorable dog here! Credit: bearcoat_tonkey/Instagram

The honky tonkey badonka bear! Meet Tonkey Bear, a Shar-Pei puppy with the face of a teddy bear, who is the Internet's newest obsession.

Tonkey Bear's lucky owner, Christine Park, wrote a post on Bored Panda about her sweet Shar-Pei puppy's meteoric rise to fame. "8 weeks ago I created Tonkey her own Instagram account for the sole purpose of making friends myself, " she wrote. "The way it was supposed to go down: post photo of cute dog, cute dog attracts good-looking friends, good-looking friends want to hang out with me."

Tonkey Bear has indeed attracted some new friends — and she's a natural in front of the camera, too. "Werkin it to work, " one post on the account read last month.

According to Park, Tonkey Bear is 100 percent Shar-Pei, although some may argue that she's part bear. The pooch lives in Edmonton, Alberta, and has a big sister named Maxi, who was a rescue pup. Naturally, Tonkey and Max are besties.

"Max, Tonkey, and Tonkey's mouth towel, " the account posted on Thursday, July 29, alongside a sweet snap of the puppies.

Tonkey is popular among other puppy pals, too.

Park spoke to Mashable about Tonkey Bear's fame on Thursday, July 29, saying some have apparently accused her of "messing around" with the Shar-Pei breed and have called Tonkey a "designer dog." She takes the haters in stride, though.

Park sought out a Shar-Pei after becoming familiar with the breed's history. Shar-Peis, which originate from China, nearly went extinct in the '70s due to mass extermination. The name is translated into "sand skin, " since Shar-Peis are known for their distinctive, rough, but adorable wrinkly coats.

"We knew this breed was special, " Park told Mashable. "And it was decided Maxi's future bestie would be a Shar-Pei."