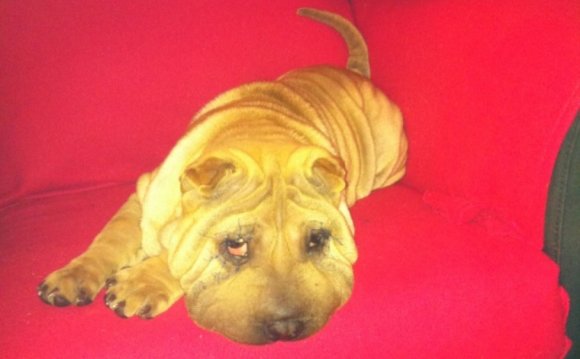 Familial Shar-Pei Fever (FSF) is a hereditary inflammatory disorder seen in Shar-Pei. It appears to be inherited as an autosomal recessive condition. Clinical signs: Episodic fever is the most important and consistent clinical sign of this disorder. The temperature commonly is in the 105-107°F range. The fever is generally self-limiting lasting 12-36 hours. Another common clinical sign often accompanying the fever is swelling of a joint, usually the hock (tibiotarsal) joint and is known as Swollen Hock Syndrome (SHS). This painful, hot swelling can also involve the carpus (wrist) and the lips. Dogs with FSF are sick - they are reluctant to move and when they do walk they have a characteristic "walking on eggs" gait. 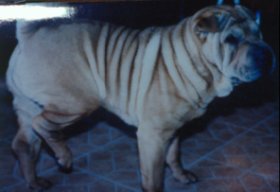 They often are painful in the abdomen and have a characteristic "roached" back. There can be gastrointestinal signs such as mild vomiting and diarrhea as well.

Pathogenesis: What we do know about this disease is as follows: