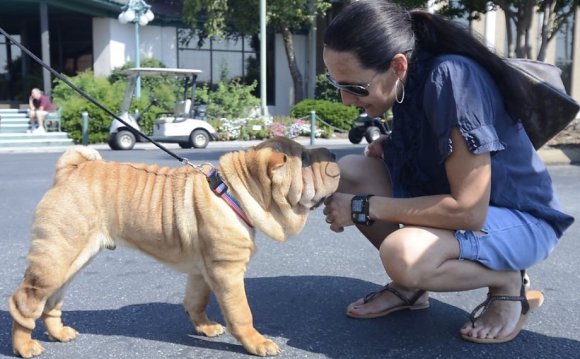 While the vast majority of the episodes of Familial Shar-Pei Fever (FSF) seen in Shar-Pei run a fairly benign course there are occasional exceptions which can have life-threatening consequences. Over the last few years Streptococcal Toxic Shock Syndrome (STSS) has been seen more frequently as a complication of FSF in the Chinese Shar-Pei. STSS involves infection with a group G streptococcus called Streptococcus canis. In the Shar-Pei cases I’ve seen this streptococcal infection is a rapidly progressing, highly invasive process which results in a necrotizing faciitis and/or STSS leading to a shock-like syndrome and multiorgan failure. If not recognized early STSS can lead to death in 24 hours or less. A similar syndrome has been seen in human medicine, the so-called "flesheating bacteria”.

I consider this a localized form of streptococcal infection. Dogs with NF tend to develop extensive soft tissue sloughing along fascial planes. Fascia is dense connective tissue which covers the muscles. Usually this syndrome presents as large areas of skin and the underlying fatty tissue dying and peeling away, hence it has been called "flesh eating bacteria”. Many of these dogs will survive with debridement or clearing away of the dead tissue, but healing is prolonged and skin grafts are often necessary. Long-term management is intense with frequent bandage changes, cleaning of the wounds, antibiotic therapy and the need for multiple anesthetic procedures to repair and reconstruct the damaged areas. The areas I’ve seen involved are often the hock joints, the flanks and the abdominal skin.

STSS seems to be a generalized or systemic form of streptococcal infection. Streptococcus canis in a potent exotoxin producer and it is thought that in cases of STSS the toxin may be responsible for the rapid progression of sepsis, shock and multiorgan failure (MODS) in cases of CSTSS. On necropsy these dogs show severe edema of the gastrointestinal tract, congestion of multiple organs, severe pulmonary (lung) congestion and evidence of thromboembolism (blood clots) all pointing to shock due to sepsis or toxemia. These dogs typically die within 24-48 hours in spite of aggressive fluid therapy, antibiotic treatment and intensive supportive care.

Recent information indicates that Streptococcus has the ability to produce hyaluronan lyases (similar to hyaluronidase in mammals) which are enzymes that can break down hyaluronan. We now know that low molecular weight HA has significant proinflammatory properties which may contribute to the severe vasculitis and tissue damage in STSS.