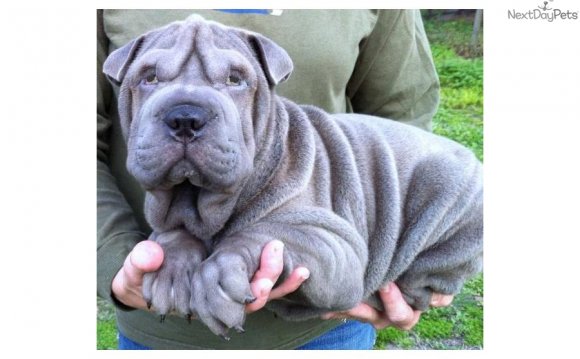 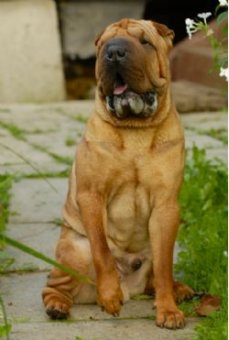 Color:The colors of the Chinese Shar-Pei are cream, fawn, red, and black.

Living Area:The Shar-Pei is a moderately active indoor dog so some space indoors is required. They will however adjust to an apartment style environment if they are taken outdoors to exercise enough. They are happier and more content indoors when they have received enough exercise outdoors. Because of their large padded head, they are very sensitive to the heat and therefore water and shade is necessary for them when being taken outdoors to exercise.

The Chinese Shar-Pei is a medium size dog with an alert and dignified stature. They are considered to be compact and square in profile. Their head is slightly larger than proportional for the body, but not excessively. They have a hippopotamus like muzzle and a very high set tail. The tail is so high set that it is said to display an uptilted anus. These features give the dog its unique appearance. The tail is one of the most characteristic features of the Shar-Pei. It should be thick and round at the base and then taper to a fine point. It should curl over to either side of the back. They are covered in loose skin which gives the appearance of wrinkles all over the body. However, the wrinkly appearance can lessen as the dog ages and then the loose skin may only appear on the head, neck, and withers.

This breed is of medium length with muscular and well set sloping shoulders. They display a broad and deep chest with the brisket extending to the elbow and then rising slightly under the loin. The hindquarters are very muscular and the hocks should be short and perpendicular to the ground and parallel to each other when viewed from the rear. It is important that the hind dewclaws are removed.

The gait of the Chinese Shar-Pei is characteristic of a trot. When the dog moves at a more vigorous speed, it is noticed that the feet seem to converge into a center line. The Shar-Pei has good forward reach and a strong drive from the hindquarters.

We have, please support our Chinese Shar-Pei breeders! 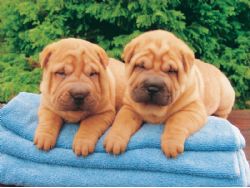 The Chinese Shar-Pei can be traced back to the province of Kwung Tung. It has existed in the southern provinces of China for centuries. They were typically the dogs of peasants. They helped the peasants with herding cattle, guarding the family and the home, and are qualified hunters of mainly wild pigs. Shar-Pei translated actually means "sand skin" or "shark skin." This rough and prickly coat was excellent in the dog fighting pits because it allowed the dogs to wiggle out of their opponent's grasp. In China they are referred to as fighting dogs and in Canada and the United States are referred to as guard dogs. They both reflect the same idea that these dogs were used for protection.

There is a theory that the Shar-Pei shares a common origin with the Chow Chow, because of the blue black mouths and tongues, the Great Pyrenees because of the double dewclaws, and the Tibetan Mastiff. Consistent with this, it is speculated that the first Shar-Pei actually appeared as a mutation.

After the establishment of the People's Republic of China as a communist nation the dog population was virtually wiped out. Thanks to Matgo Law and his dedication to the breed, a small number of Shar-Pei's were brought over to the United States in the 1960's and 1970's.

The Chinese Shar-Pei can be described as highly intelligent, independent, dignified, and snobbish. They can be standoffish with strangers but will remain devoted and dedicated to their family. Due to their history as herders and guard dogs, they are very alert and have a calm and confident stature. Despite its scowling and frowning expression, the dog is very easy going and calm.

The Shar-Pei is considered to be an excellent family dog. It is devoted to its family and owners and makes an excellent watch dog. Their standoffishness will minimize with regular visitors. They generally do well with children and other pets when they are socialized around them as a very young puppy. Although they are standoffish around strangers they are not considered to be unfriendly. The Shar-Pei has an extremely dominant and independent nature and therefore it is pertinent that they have a handler who can show the dog who is boss. If the handler is uncertain or wavers in their commands and training, the Shar-Pei will take over as boss and become very dominant. It is suggested that Shar-Peis are for experienced dog owners. They will refuse commands from family members who have not established a level of dominance with them.

The Shar-Pei has a high dislike of water. They will avoid water for baths, but have been known to enter ponds, oceans, lakes, rivers, etc. of their own accord. Consequently, the Shar-Pei should be trained from an early age to accept being bathed. However, they are excellent house pets because they are considered to be extremely clean. In fact, the Shar-Pei will basically house break itself. This will make having a puppy in the home a little easier. Despite their desire for cleanliness, they do shed some and tend to slobber and drool especially when in pain.

Ben the Blue Sharpei, at 5 months