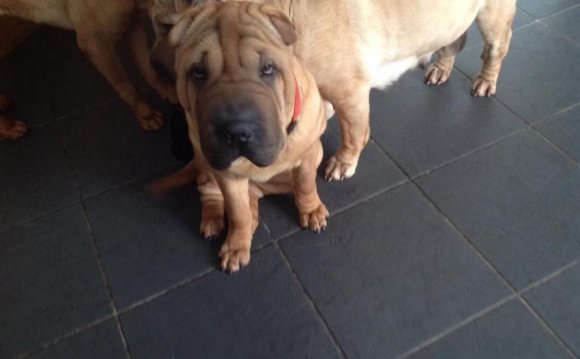 The Shar-Pei is probably one of the most unusual looking breed of all the breeds. The reason they bred them to have all those wrinkles was because when they got into dog fights, their internal organs were protected by the wrinkles. It’s definitely a great protection dog. It’s the one place where wrinkles are cute—is on a Shar-Pei.

They’re just this ball of wrinkled skin. The wrinkles fade. Don’t we all wish the wrinkles faded, as Shar-Pei get older. One Shar-Pei, two Shar-Pei. That’s right, the plural for Shar-Pei is Shar-Pei. Don’t worry, everybody gets it wrong. 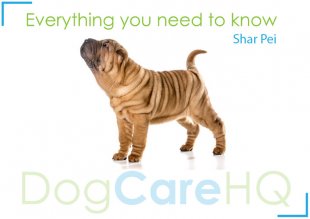 These adorably wrinkly puppies were not always as cuddly and approachable as they seem today. Two thousand years ago, they were down right macho. The Chinese Shar-Pei was a dog bred by Chinese royalty to guard the high palace and protect the royal family, but the communist revolution turned everything upside down for the Shar-Pei. The Government put a tax on every Chinese dog, the Shar-Pei was about to go extinct.

Then, to the rescue of all things an American magazine. That’s right, Life magazine published a front page photo of a Shar-Pei in the late 70s and overnight the American public became smitten with these puppies, which sold for $3, 000 a pup.

Soon those adorable puppies started popping up in ads and they became the status dog. My father, for some reason, got it locked in his mind that he needed us to have a Shar-Pei. So, low and behold, we did go somewhere and we saw a litter and of course, they’re incredibly cute puppies.

What people loved was the wrinkly skin and what appeared to be fluffy fur. The name Shar-Pei, literally means, “sand skin, ” referring to the two distinctive qualities of its coat, rough and short. The sand skin is offensive to attackers. You see, it’s all about the fighting. Here another dog would grab the skin, but wouldn’t be able to necessarily get at something that was more important.

Another distinctive feature of the Shar-Pei is the blue black tongue. This uniquely coloured tongue was thought to ward off evil spirits when exposed while barking. According to legend, it made the dog look fierce. They’re very territorial of their environment, so they do make a great guard dog.

With moderate exercise, the Shar-Pei can be a good country, town or city dog. Unfortunately, over-breeding has created some health concerns with the breed, including, eye diseases, allergies and skin irritations. But the wrinkly folds in the Shar-Pei skin sometime trap bacteria and need extra cleaning. But with proper diet and regular cleaning, these dogs won’t require excessive grooming.

They’re kind of a moderate grooming dog. They need regular bathing and they need attention paid to their skin, but regular ear cleaning and nail trimming is sufficient. It’s never too early to start socialising this breed to be around young children and strangers.

An experienced trainer is recommended. They are cute puppies, but the training they’re a little hard to motivate. Shar-Pei are a loyal and devoted breed, but as a rule, do not do well with small children. This would be a dog that I would definitely have as one man or one woman puppy.

Jack Sparrow the beautiful Shar Pei playing with his new ...