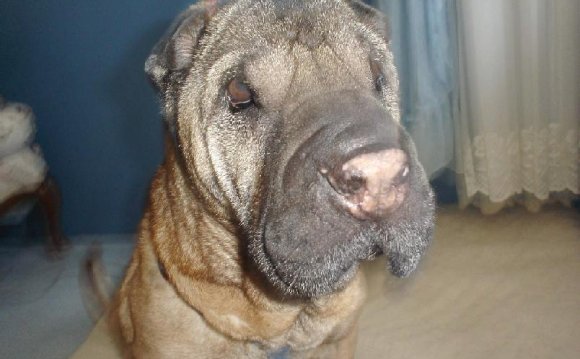 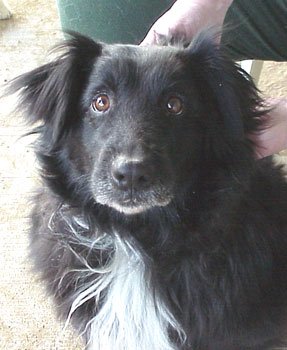 Chows and Shar Peis do not have a monopoly on pigmented tongues. Some purebred Aussies have spots of pigment on their tongues as well. On a blue or black Aussie the tongue spots will be gray or black. On a red or red merle the tongue spots are liver (red). The mode of inheritance has not been worked out, but dogs who have them tend to have relatives who have them. They may be evident very early in puppyhood or they may develop later. For safety reasons any newly appearing spot of color where there wasn't one before should be checked out by a vet to make sure it's not an oral cancer.

Ginger, a pretty black bi female, belongs to Sherry Clark of Megabucks Aussies. Ginger is linebred from the old Reddy Teddy lines. Her grandfather and uncle were reds, and they had red tongue spots. Ginger is 8 1/2 yrs old in this picture, and the spot became prominent after she was 5. 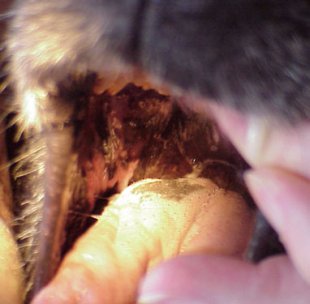 Note - in this case it's a normal healthy pigmented tongue spot, but be sure to have any pigmented spot that changes in appearance checked by a vet just to make sure it's not cancer.

This is Ginger's mouth and tongue. The area is illuminated with a flashlight, which gives a slight yellowish cast. The whole inside of her mouth has quite a bit of pigment, and the tongue spot is located right at the top rear of her tongue. Sherry says the spot is actually quite black, but the exposure makes it appear lighter than it really is. Ginger's spot is somewhat large and is irregular in shape. Many thanks to Sherry for her considerable ingenuity in getting this shot!

This is Case's Tin Woodman "Woody", courtesy of Sandra Case. Woody is a self blue merle with at least 4 visible tongue spots. Unlike Ginger's single big spot, this guy has multiple round spots of similar size. His tongue resembles a domino in reverse!