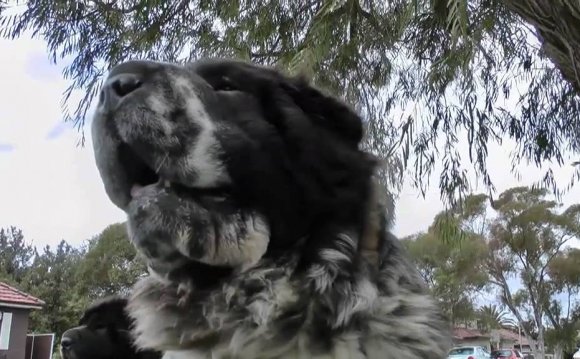 3. Tonkey is a bear-coat shar-pei, and looks something like a living stuffed animal.

5. The four-month-old pup is owned by Canadian Christine Park, 26, and her boyfriend, Dave, 30.

7. Tonkey is “silly, stubborn, and loyal to her friends and family, ” Park told BuzzFeed.

9. But she’s still figuring out this whole stairs business (in the cutest way possible).

13. Though they’ve only known each other for a couple of months, Maxi and Tonkey are BFFs.

15. “Wherever they are, Tonkey feels the need to be near Maxi, always touching, and always cuddling when they sleep, ” Park said. 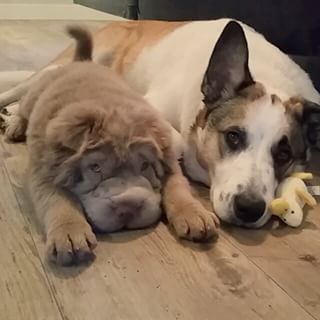 17. When deciding what kind of second dog to get, the couple became fascinated with the history of shar-peis, which almost went extinct in the 1970s.

“It wasn’t until Tonkey’s litter was born that Dave and I learned what a bear coat was!” Park said. “We were thrilled to discover the existence of ‘fluffy’ shar-peis, and it was an easy decision for us.”

19. “Bear-coat” shar-peis are incredibly rare, because their fuzzy features are caused by a recessive gene that both parents must carry.

21. So Tonkey is pretty special!

23. The little puppy has tons of fans, especially on Imgur, where she first became a hit with Tonkey Tuesdays.

27. But Park said she also gets some negative comments that claim she’s a “designer dog” resulting from “messing around” with the breed.

“I would love for everyone to know that this is an ancient breed that overcame a rough history, from dogfighting rings to mass extermination, until finally being rescued by the U.S., ” Park explained.

29. The Edmonton native added that she and Dave are huge advocates for dog adoption, and rescued Maxi.