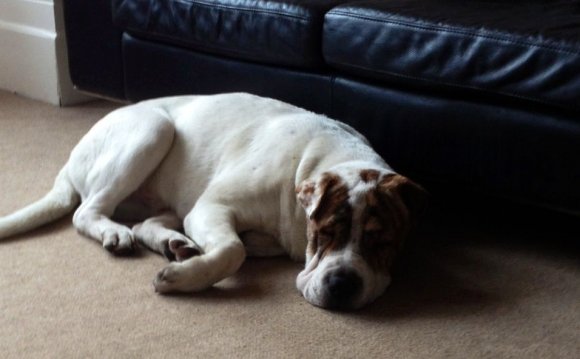 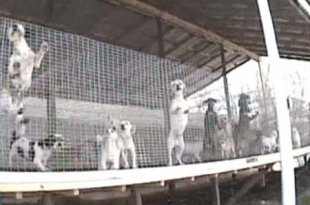 MAIN MESSAGE: As a mass producer of puppies, Kathy Bauck's breeding kennel (Pick Of The Litter, aka Puppies On Wheels and other aliases) has housed over 1, 300 dogs and puppies and she has bred over 100 different dog breeds.

This story is about animal cruelty and breaking laws — but it's also about money. For many years, Kathy Bauck grossed over $500, 000 per year from the sale of animals by cutting corners in the care of those animals. She is part of the multi-billion dollar dog and cat breeding industry that has profited from the mass production of puppies.

Some cages within Pick Of The Litter kennel. Photo from CAPS undercover video.

Kathy Bauck is a dog breeder/broker located in Pine Lake Township near New York Mills, Minnesota. Bauck has operated her kennel, originally known as Pick Of The Litter or Puppys On Wheels, for over 25 years. (Business names have changed; see below.)

Kathy Bauck's kennel is known as a puppy mill.

Prior to her conviction for animal torture, Bauck was considered one of Minnesota's largest dog breeders and brokers, producing and selling thousands of puppies to consumers and pet stores throughout the United States. Her husband, Allan Bauck, daughter, Corinne Peters, and sister, Janet Jesuit, also participated in the business.

Pine Lake Township is a rural area in northern Minnesota.

Inventory counts (i.e., how many adult dogs and how many puppies are within the kennel) are recorded on USDA inspection reports. This count represents what is seen on that one day by the USDA inspector. The total number of puppies can vary considerably because a puppy shipment could have been made a day or week before an inspection, so lowering the total count. The total number of adult dogs may stay more constant; these are the animals that are kept in cages their entire life and bred repeatedly. When no longer of use, the adult dogs are killed, sold at auction or sold/donated to others.

• 6 (Consent Decision revokes AWA license; Bauck is allowed to keep 6 dogs total, of which 3 can be breeding females) - September, 2011

The following information is "according to Kathy Bauck's own applications for Animal Welfare Act license renewals", as reported on the First Amended Complaint. On these renewal forms, Bauck stated she sold the following number of animals and grossed the following amount of money from the sale of those animals. As this is Kathy Bauck's own records, it is impossible to confirm if information below is accurate or if number of animals sold and money earned was higher during this period.