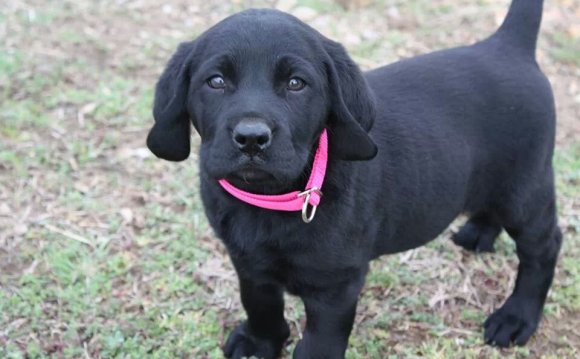 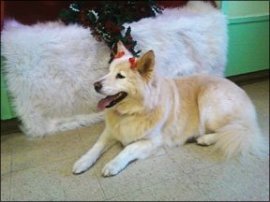 Apparently, so, so much!

The January issue of Whole Dog Journal featured “Say My Name, ” an article by Pat Miller that explained the importance of teaching your dog to recognize and respond to his or her name. In a sidebar to that article, Pat also discussed the issue of naming (or renaming) your dog. And she announced a little contest for our readers, asking you to share the story of how you selected your dog’s name and why. Pat said she would select some winners and the “top three” would win a signed copy of her newest book, Do Over Dogs: Give Your Dog a Second Chance for a First Class Life.

Apparently, dog names are very important to our readers, too. We received more than 250 contest entries, via the U.S. mail and email, as well as through comments on the WDJ website (whole-dog-journal.com) and the WDJ Facebook page. (All of the Facebook and WDJ website entries can still be viewed online.) When we read them, we laughed, we cried, we felt like these stories ought to be a book! But picking a winner was difficult – kind of like adopting just three dogs out of a huge shelter full of terrific canine companions.

There was nothing scientific about Pat’s selection process; she simply chose the ones that touched her the most, with an admitted bias toward shelter and rescue dogs. Below are Pat’s three winners and three runners-up. Thanks to everyone who shared their funny, sweet, and memorable dog-naming stories. 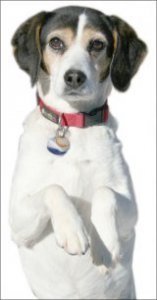 Here is the story of my “do over” dog.

In 2004, after losing my beloved girl, Grace, I was adamant about finding a dog who needed a new chance. After many weeks of looking I was contacted by my vet, who told me about a six-month-old Shepherd-mix who had been severely beaten and left abandoned.

When I went to the shelter to see her I noticed that “Linda” (as she was then known) was being bypassed by all the people looking for dogs that day. When I finally stood in front of her kennel it was easy to see why. She was a mass of bruises and lacerations, and the only fur she had was on her head. I gently knelt down and without hesitation she came up to me and licked my hand. In that moment Hope was reborn. She joined her “sister” (my Cocker-mix, Faith) and has been a wonderful member of my family for the past six-plus years. And last year on Christmas Eve my third girl, Joyeux Noel was born.
My three girls, Faith, Hope, and Joy are ambassadors of love in my little town. 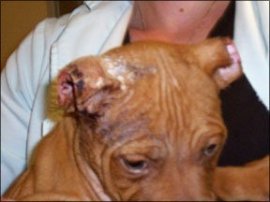 My pit-mix is named “Score.” Here’s his story:

I have a friend from an online message board who takes his dogs to a doggy daycare in North Carolina. My friend fostered and found homes for two Lab puppies who had been abandoned near a Dumpster near the daycare, so he was the one the daycare called the next time they needed to find a home for another abandoned pup.

It seems that a drug addict wandered into the daycare’s store area and stole 0 out of a donation jar. A few days later, he wandered back into the store. They told him to get out or they’d call the police. He asked them if they’d seen a puppy. With a lot of eye rolling, they told him to leave. Sure, he’s got a puppy . . . right! About an hour later, they found an eight-week-old puppy sitting on the sidewalk in front of the store. They scooped him up and called my friend, who took the puppy, of course.

My friend posted pictures of the puppy. I asked – half joking – if he’d like to donate the pup to my local assistance dog organization. He agreed readily, and we arranged for the new pup to come to Maryland.

I named him Score, both for his “old owner” and for his new life; he sure “scored”! He ended up washing out of the program because of his looks (too “pit bull”) and he stayed with me. He’s now a service dog demonstrator, a therapy dog, and an awesome flyball dog! 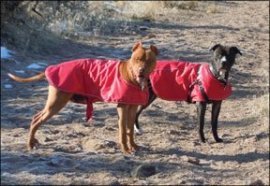 On September 11, 2001, I needed a bit of love so I went to my local animal shelter. I was looking for a dog with good potential for becoming a trick dog. I was just getting started on training a group of dogs to perform together and I needed just the right dog to fit into my family.

When I got to the shelter I saw several dogs that would be great, but one caught my eye. She was a Beagle-mix, just circling in her cage. I knew this was not excitement, but stress. The closer I got, the faster she circled. I took her out. She jumped in my lap and proceeded to lick me all over. It was just the thing I needed on that sad day.

I took out some treats and played with her. I quickly found that she did the most beautiful stand on her back legs, like a statue! And because of the day, I thought of the Statue of Liberty. A patriotic name to remember the day and honor it. Liberty needed a job, as her neurotic circling was a major issue. But 10 years later she is one of my best working dogs, still curls up in my lap with kisses, and will always stand tall like the symbol she was named after!

Pat Miller selected the following three stories as runners-up in our contest, but of course these terrific owners are winners in their own right. What great stories!

When we were little, my grandmother used to unpin her hair, brush it until it crackled, and tell us she was a witch. Then she’d tell us the story of Little Dog Toby, who would bark! bark! bark! to scare away the hobbyahs that came of out the swamp at night to eat the Little Old Man and Little Old Woman. Unfortunately for Little Dog Toby, the Little Old Man (who hadn’t read Don’t Shoot the Dog!) thought Toby was just being obnoxious and came out with the scissors each night to cut off a body part and shut him up, starting with his ears.

Fast forward about 25 years, and I’m a veterinarian working with several local rescue groups. Thanks to a tolerant husband, my house is something of a halfway house for injured bully breeds. Usually they go on to long-term placements, but some of them stay. One of those is Toby.

Toby was anonymously relinquished to me after a home ear crop job went south. He came after a street-corner handoff, shaky and sick, ears crusted with blood, and dead tissue and cartilage hanging out everywhere. The lines of Sharpie ink were still visible on one side.