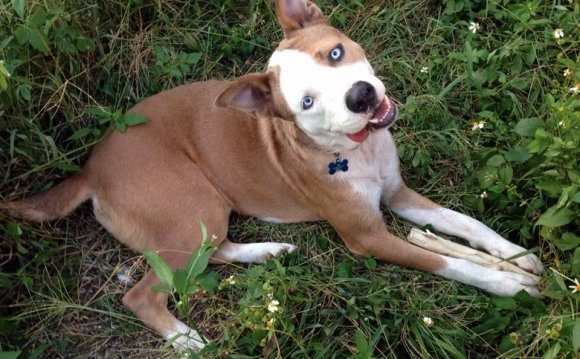 A tiny little wedgy head with wee Dorito ears
Atop a stocky neck festooned with many wrinkled tiers
Leading to a barrel chest and then a roundy gut,
Ending in a bushy tail upon a wiggly butt.
—
Zelly, being a stray acquired from the pound, had a history that was unknown to us—not just in terms of the life she led before our paths crossed, but also regarding her genetic history. She was called a Rottie mix by the shelter, but there was never any rationale for that assignment except her color (which is common in many breeds)—she is only 45 pounds and has none of the traits of a Rottie. The vet said she was probably a Shar Pei mix, which seemed likely given her foldy triangular ears and her abundant neck wrinkles.

Guessing at her mystery history has always been great fun (and people are happy to join in, even when unsolicited; I have been told with certitude many times she is DEFINITELY a Rottie mix, when I have offered I think she's a cross of a Shar Pei and some foxy little herding breed). And if she hadn't likely had, as part of her background, some Shar Pei parentage, that guessing game may have gone on forever.

But. The thing about Shar Peis (and Shar Pei crosses) is that they are prone to what's known as "Shar Pei fever, " which recently came knocking on our friend Van's door. He is doing better now, thanks to a very expensive medication, and the love and loyalty of his human family. We have lost other Shar Pei friends to amyloidosis. I suddenly longed to know for reasons other than mere curiosity what Zelda was made of. Was she half Shar Pei? Less would certainly be better.

So, I got a top-of-the-line doggy DNA test. Zelly was decidedly unthrilled about having the insides of her cheeks swabbed, but being the good girl that she is, she reluctantly complied. We sent the swabs off, and three weeks later, we had our results... 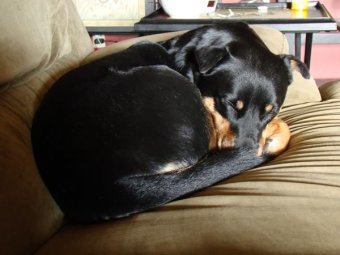 Or, as Deeky has dubbed her, the Linda Hamilton of Dogs.

I am surprised by how much I enjoyed getting the results of the test. Finding out her breed history was like seeing a baby picture of her, or having her reveal a secret about herself to us for the first time. I felt instantly as though I knew her better, or, perhaps more accurately, understood her more. The puzzle pieces, put together, made perfect sense—a clear picture.

Iain and I excitedly discussed the manifestations of each breed in her character and habits. Her strong herding instinct and quick learning curve and that body shape—so Australian Cattle Dog! Her double coat and bottle-brush tail—so Husky! Her guarding of the manor and her energy level—so Shar Pei! Her plumiferous shedding—SO ALL THREE!

I'd always guessed some sort of pinscher due to her black-and-tan markings and scissor bite, never having realized both could be inherited from the Husky breed. Now that I know, I feel silly for never having placed the telltale curl of the Husky, nose tucked under tail.


It's a funny thing: If anyone had asked us if we'd ever wanted to own a Husky, or a Klee Kai, or a Shar Pei, or a Heeler, we'd have said no. (Not that we don't love them all.) But she is none of those breeds, and she is all of them.

There are people who don't want mutts. You don't know what you're going to get. That's true. But you don't really know what you're going to get within a breed, either. Dudley and his cousin Alfie couldn't be more different in temperament. One is always taking a chance when one invites a dog into one's home. Mutts are worth taking a chance on as much as any other dog.