The Shar-Pei is probably among the most ancient of dog breeds. Pottery would suggest that he was present during the Chinese Han Dynasty and more specific references are made to the Shar-Pei during the 13th century. At that time he was used by farmers to guard both houses and livestock. It was believed that his wrinkles and purple tongue had the ability to frighten away evil spirits, making him a very popular breed. It’s been suggested that because the Chow Chow also has a purplish tongue he might share a common bloodline with the Shar-Pei.

Later, the Shar-Pei became a popular fighting dog. His loose skin allowed him to retaliate even after he had been clamped onto by another dog.

After the communist takeover of China, Shar-Pei numbers plummeted. They were considered to be a symbol of an overly decadent lifestyle and were only kept on rural farms and in Hong Kong, which was still part of the British Empire. Matgo Law, who lived in Hong Kong in 1973, took it upon himself to revitalize the breed which was rapidly nearing extinction. He wrote an article which informed Americans how rare the breed was and asked for help in saving it. America heard the call and responded in force, many desired the Shar-Pei simply because it was rare. The Shar-Pei made a stunning turnaround in the years following. 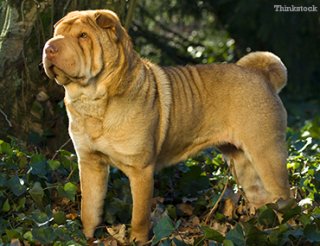 The Shar-Pei can be very territorial and suspicious, traits that echo from his origins as a guard dog. He needs to be socialized early and often to control these behaviors. The Sher-Pei will eventually accept new people but he will likely only ever form a strong bond with his family.

The Shar-Pei has a strong will and a desire to be independent. He can live outdoors much of the time but would prefer to split his time evenly between the house and yard.

The Shar-Pei will require only a daily walk to satisfy his exercise demands. After which, he’ll be a great companion for the family. He won’t bark unless he’s playing, or unless he has found something you really want to be paying attention to.