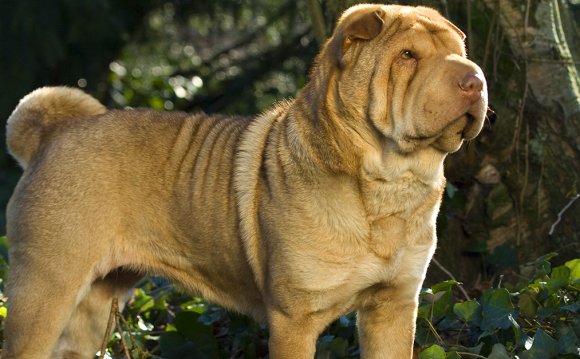 Shar Pei and have now become an extremely popular breed in the US and their popularity is constantly growing here in the UK. Now I don’t know about you, but until yesterday, I knew NOTHING about this particular breed. Despite their growing popularity, they are still quite a rare sight. I have only ever spotted this breed of dog twice in my life. The first encounter was on a bus. The big wrinkly dog was sitting very obediently and staring very deeply into it’s owners eyes and the second time was at a pet show, when I spotted one having a snooze in it’s owners arms!

So from these two sightings, I concluded that they dote on their owners (like all dogs) and they like to sleep – like all dogs. I suspected there was more to the Shar Pei than staring and sleeping so I endeavoured to find out more about this unusual breed. And what interesting creatures they are! So now I know what they’re all about, I’m sharing this information with you. Read on to discover where they came from, what they’re like as pets and how best to look after their gorgeous wrinkles.

If you haven’t seen Shar Pei Puppies before, you’re in for a real treat. Never mind the photos here, to see them in person is a real delight. They are a large animal and hold a wonderful presence, both in appearance and stance. They are covered with heavy wrinkles on their head, lighter wrinkles on their shoulders and some near their bottom and tail. Puppies tend to be generally more wrinkled than adults. They have a distinct blue black tongue, thought to be the result of some historical cross breeding with the Chow Chow, another Chinese dog who shares this unique trait.

Shar Pei have small triangular ears and a high set curled tail. They have a large ‘hippo shaped’ muzzle making their faces very distinct and unique. There are many colours of Shar Pei, the most popular being black, blue and cream. Three different types of coat can be found on a Shar Pei, ‘horse’, ‘brush’ and ‘bear’. Horse coat Shar Pei are prickly and rather rough to the touch. The coat is very similar to that of the original breed which were predominantly used for working and fighting. Horse coat Shar Pei also tend to retain the temperament of the original working dog, making them the more dominant and active variety. The brush and bear coat varieties have slightly longer and smoother fur. The brush and bear coats tend to have a far more relaxed and gentle temperament which makes them an ideal domestic family pet.

Where Do Shar Pei Originate From?

They come from a province in China called Origin of Shar Pei Guangdong and they are recognised as one of the seven most ancient dogs still around today. They were originally used as working dogs to protect farm stock and guard the farmer’s family. The dogs were of a tough disposition and could happily work all day long. Shar Pei were later used for dog fighting, as their wrinkly loose skin and rough coat made them a tough match for all the other dogs, sending them scattering for lack of grip on their loose skin and prickly exterior.

During the Communist Revolution, numbers of the dog depleted drastically, however in 1973 a businessman from Hong Kong acquired a few of the dogs in an attempt to save the breed. From the few dogs that he owned, he managed to attract enough attention through a US magazine article about the breed. Since that point onwards, the popularity of Shar Pei grew dramatically.

Do They Make Good Pets?

The short answer is ‘yes!’ Their natural instinct to guard make them a very protective, loyal and affectionate pet. Due to their origins, they can be wary and anxious around strangers and may bark, however, if socialised from a young age, they are more accepting of strangers, other animals and children. Keep your Shar Pei stimulated as it can get bored of repetitive tasks or training. They can be an independent dog but are very playful and interact well with other dogs. Shar Pei tend to develop loyalty to one owner and trainer, so make sure you get your whole family involved in their training so they will take command from them all.

If you are thinking about acquiring a Shar Pei, you need to have a firm hand and good leadership skills in order to instil good behaviour from a young age. You must teach your Shar Pei that humans are the boss. Giving them a good walk every day will help maintain good behaviour and less restless activity in the house. That said, they make great family pets, are easy to groom and maintain and are very receptive to early training techniques.

How Do You Care For Shar Pei?

The Shar Pei is a large animal and due to the active background of the breed, will need lots of daily exercise. They can live in a small apartment or flat but they must be walked for a least 30 minutes daily and more if possible. Along with other wrinkly pets such as Pugs, their lovely wrinkles need cleansing daily (awww). So a nice warm flannel with a little sensitive doggy wash will do. Wipe their face between all the folds and under their ears daily. Make sure you do not leave the areas wet as they may encourage bacteria and yeast infections, especially under the ears. You should aim to wash your Shar Pei once a week and give his coat a good brush daily. Brush your dog before his wash and you’ll be able to get that coat lovely, shiny and clean but eliminating all the loose hair first.

Shar Pei do not shed much due to their very short coat however if they remain unbrushed they will have an unkempt appearance and the loose hair will not allow the new coat to grow through easily. Despite their coat and wrinkles, Shar Pei are quite easy to care for. If unsure of how to groom your Shar Pei or indeed any breed of dog, the best thing to do is to take it to a dog groomer for the first time and observe what they do. They will be able to offer you tips on keeping the coat clean and also provide you with basic hygiene tips for their ears and wrinkles.

Do They Suffer Any Health Problems?

Due to the rushed breeding practices that took place during the 70s, Shar Pei can suffer from health problems. The most serious problem being Amyloidosis. This is a condition of the kidney or liver making the breed susceptible to short bouts of fever which can last up to 24 hours.

Sharpei puppies with minutes of life