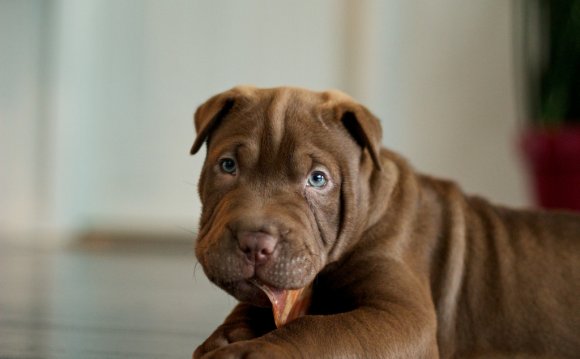 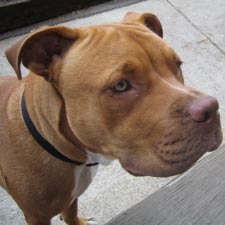 American Pit Bull Terriers are affectionate, loyal and happy dogs with loads of energy and a natural eagerness to please their guardians. This breed has sadly gotten a bad reputation in the media due to owners who raise them for the wrong reasons. With proper socialization and training, as with any dog, your American Pit Bull Terrier can be an exemplary member of the family.

They love to play fetch, go for runs and accomplish tasks - American Pit Bull Terriers are natural workers, excelling in agility trials, search-and-rescue and obedience trials. Keep them busy and loaded with positive reinforcement, and they’ll continually surprise you with an upbeat and steady temperament.

Things You Should Know

American Pit Bull Terriers may sometimes display protective or competitive instincts around other dogs and animals. They are strong enough to handle rough play from a child, but strangers and unfamiliar dogs can sometimes trigger their suspicions.

APBTs might not be the best apartment dogs, though as long as they get plenty of outdoor exercise they’ll be happy. Ideally, a fenced yard suits them best, not to mention daily games of fetch.

A healthy American Pit Bull Terrier can live as long as 12 years. Common health problems include hip dysplasia and some allergies.

Bred from Bulldogs and Terriers in 19th-century Britain, the American Pit Bull Terrier eventually became a helpful farm dog and family pet. Two organizations were formed to legitimize the breed—the American Dog Breeder’s Association and the United Kennel Club. In the United States, American Pit Bull Terrier owners also sought to legitimize the breed, and in 1936 the AKC registered them as “American Staffordshire Terriers.” Today they are one of the most popular breeds in the U.S.

The Look of a American Pit Bull Terrier

My favorite breed is the American Pit Bull Terrier. I have had these dogs for over 20 years and they have always been loyal and smart. I live on a farm and they get along well with my horses, cats and other dogs. They are not for everyone though as most strong breeds aren't. They need to have a gentle but assertive owner. Pit Bulls need to be socialized and obedience trained and loved! They need to be in your house loved not chained in some back yard! They were wonderful with my children and have very stable temperaments. I volunteer at the Indianapolis Animal Shelter and see wonderful dogs there available every day! My two are rescues from there. Give them a chance and you will be hooked on Pitties too!

I love my American Pit Bull Terrier, who is a true family pet! She is so playful, yet gentle with my young children and loves everyone she meets.

She sleeps with me and my husband every night and is a quiet TV-watching buddy. I recommend this breed to any family looking for an indoor pet but who has a backyard for exercise or time to walk them. They love to be with their person or people and are so eager to please.

There are plenty of this breed at local shelters everywhere just longing for a loving home and would be loyal in return. We adopted ours from a shelter and she caught on to basic commands quickly - she is very smart. Everywhere we go, people tell me how strong and beautiful she looks.

I wouldn't swap mine for the world

We have three Pit Bull Terriers. The two older ones we have owned for approximately 10 years and had them since they were three weeks old when they had to be taken from their mother.

I have owned Pit Bulls before and in my experience they are loving and loyal. Along with that though, they are quite needy and want to be close all the time. They can be stubborn and each one I have ever owned has their own very different personality.

I trust them 100 percent with my family, including my grandchildren and they are very good with our four cats. They have a high tolerance before they let you know they've had enough. They walk away. In my experience they can be antisocial as far as other dogs go, though. They need to be ruled by kind but firm owners. I wouldn't swap them for the world - they are my best friends.

What I love most about this breed is how they have a distinct personality. They seem to think they are human and learn very quickly. Living with one is like having another baby! If you are thinking of getting a Pit Bull (or any dog, really), have the time, patience and energy to train them properly. And don't set them up for failure, they want to please you so much.

My Pit Bull mix is an angel

She is 60 lbs. of pure love. She loves cats, 99.9% of dogs, and ducks. She is a mix, so her head is bigger than it should be, so she draws a lot of attention. Her ears are like TV antennas, one up and one sideways. And she plays with very small dogs. A 4 lb. Yorkie puppy is her best friend and they play at 100mph till she tires!

Pit Bulls are such clowns!

We have two American Pit Bull Terriers. They are sweet, loving dogs that make us laugh constantly, but I wouldn't want to be a stranger trying to enter the house uninvited!

They are both our spoiled babies. They sleep with us every night, along with our toy poodle. The best advice I can give about this breed is to love them like the sweeties they are, but never trust them not to fight. Remember they are terriers, and like all terriers, can sometimes be prone to animal aggression.

The mythology around Pit Bills is bunk

After owning a Pit Bull for 16 years and a mix for 15, have to say the mythology around Pit Bulls is bunk. The gentlest, calmest dogs I have ever owned - great with kids, great with dogs, particularly pups. Endless patience with children, you could even say they were kind. They took their job very seriously and were the constant companion to the kids and would play endlessly. They were watchful, a stranger was guaranteed to have a bully position itself between the kids and them if my wife or I were not close to the action - no growls, no attack, just their confident presence was enough.

Hank the Shar Pei mix thinks he is a mountain goat