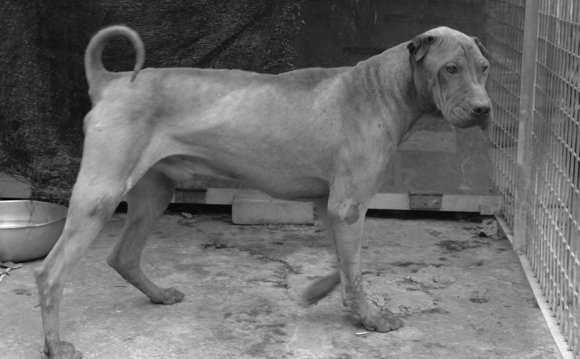 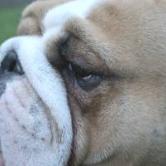 Day one (ABOVE) of entropian surgery. First of all its a good idea to withhold food for at least 18 hours or so before surgery. I fed Chinook at 3 pm the day before surgery. Surgery was at 11 am, and he vomited up some food right after the surgery. Bulldogs seem to be known for that, so let your Vet know.

I brought Chinook home at 3 pm. He seemed sluggish, tired. Walked slowly. The eyes are swollen and the lid seems to be pulled away from the eyes. That is only due to the swelling, though, and the lid should lay nice and flat against the eye, and there should be no drooping of the lid, once it is healed.

I was sent home with pain medication, to be given that evening, and then every 12 hours for 3 days. It has to be taken with food. After drinking a little bit of water, Chinook threw up 3 times. Nothing but stomach acid and bile. He was not interested in food, and I held off giving any. Around 9pm I really wanted to give him his pain meds, so I mashed up a little bit of his food with hot water and a tiny bit of chicken broth. Handfed him about 1/4 cup of this.

After that I gave him his pain pill and he finally slept soundly through the night, after pacing and being uncomfortable most of the day. It is a good idea to get the Bulldog used to a Elizabethian collar PRIOR to surgery, as many bulldogs will freak out about them. Chinook did not attempt to scratch or bother his eyes at all, so I just watched him closely and did not put the collar on. The incision looks crusty and a bit weepy..but I did not try to clean it up, as I want it to heal without aggravating it.

Now that the nausea is over, Chinook felt much better. He still gets a painpill with his food every 12 hours. His eyes are still swollen, but there is no more discharge. The incision is still somewhat "crusty" but I'm hesitant to clean it and pull the edges of the incision apart. Chinook is back to running and wanting to play. 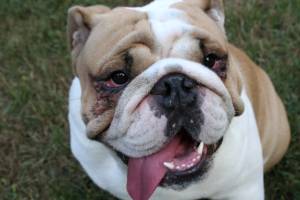 The pain-pill does make him tired, though. He tried to rub the wound twice today, but I stopped him each time, and he hasn't tried since. It REALLY is a good idea to get the bully used to the e-collar BEFORE surgery. Chinook has a hard time with his, and does not want to either sit or lay down with it on. But it is necessary, and unless I'm right with him while he sleeps, he has to wear it.

Chinook is back to his old ways, playing, running, wanting to chew on his bones. I really have to watch that he doesn't overdo it. Also he isn't allowed to romp outside with his shepherd brother yet.

The eyelids are still swollen and puffy, but the eyes are clear and around the lens itself they look white and healthy. The incision is still puffy as well, and sometimes a bit "moist" looking.

Healing is going well. Ordered some Emu Oil to start putting on the scar, as its known for wonderful healing properties and should also help with less scaring.

Chinook took his last painpill this morning. Throughout the day he was completely happy and relaxed. The swelling is beginning to go down, and the color of the lid is not as angry red anymore. He only occasionally "hacks, coughs" anymore, esp. after drinking.

So his throat irritation from the trach. tube must have healed up. I continue to give him the antibacterial eye ointment (thich, vaseline like) twice the day. It coats, soothes and protects his eye and the area below. He still doesn't attempt to scratch or rub his eyes.

Chinooks left eye looks wonderful, no more crusties and the incision is clean. The swelling continues to do down slowly. The right eye (the one that was worse) still has some crusted discharge on the incision. I won't try to get it off, for fear of opening the wound. That incision also looks a bit "puckered" and more swollen, due to them taking more skin on that side. All over, Chinook is doing wonderful. He still hasn't attempted to scratch, but I keep a very watchful eye on him and when I have to leave, the e-collar goes on. 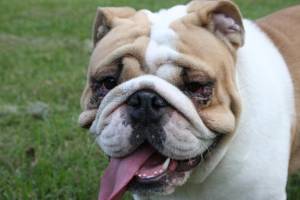 Chinooks eyes look better. There is still a slight swelling that pushes the eye-lid away from the eyes, but its improving. No more coughing at all. No attempts at scratching at the eyes.

The swelling is going down a little more each day.

Chinook still isn't trying to rub or scratch his eyes, but I'm being watchful.

Chinook is doing well and continues to heal.

Chinook is doing well and continues to heal. Stitches will be removed on the 12th day after surgery. It was supposed to be the 10th day, but since one eye (right eye) still has a bit of swelling, the Vet feels its better to leave the stitches in 2 additional days.

Swelling continues going down slowly. The eyelids are only pushed away from the eyes a little bit now. Chinook only tried to rub at the stitches once today. Tomorrow he was to have his stitches out, but the Vet decided to give it 2 more days, since his right eye was more swollen then the left.

Continues healing, stitches will be removed tomorrow. Chinook is being good, not trying to scratch or rub his eyes.

NOTE: Bulldogs, because of their short faces and loose skin (wrinkles) on their faces, may have entropion eyelids.

This is a condition in which the eyelashes turn in and rub against the surface of the eye. This will cause irritation and could lead to blindness.

The eyes are inflamed, lids swollen and there is excessive tearing. Other short nosed breeds are subject to this same condition. The usual treatment is a minor surgical procedure.

Day 13: Today Chinooks stitches were removed. The Vet is very happy with his eyes and the healing goes well. The swelling will eventually be completely gone and the lid will lay flat against the eye again.

Chinook is still a young dog and growing. In about 30% of cases the surgery will have to be repeated, according to the Vet. They only take as little skin as possible, so not to cause a reverse effect of a exposed eye. As the dog grows and the facial wrinkles/features grow along, the lid can slightly roll towards the eye again.

In those cases the surgery gets repeated, only taking a very small amount of skin. Hopefully Chinook won't be one of those cases. His eyes look great and I'm very happy with my Vet and the surgery.

BulldogsWorld thanks LU for these pictures and the daily log!

Entropion occurs when the eyelids and therefore, the lashes are turned in towards the cornea. The condition is usually inherited and most often seen in the Bulldog, Pug, Shar-pei, Chow Chows and Rottweilers but other breeds can be affected. Some dogs may have symptoms as soon as the eyes open but more often the inversion becomes worse as the skin and lids develop. 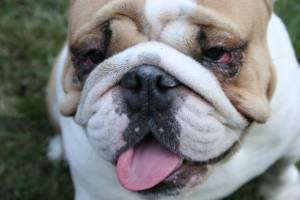 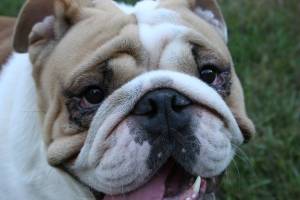 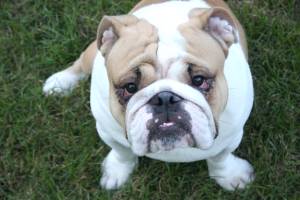 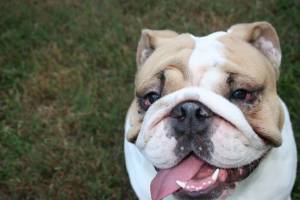 Usa Essay Writing Service An Essay On My Favourite Game Chess Who Can Do My Paper .