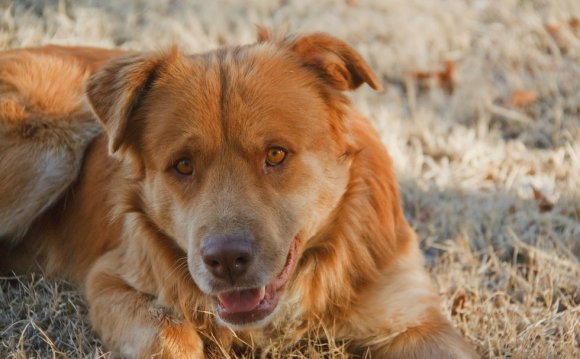 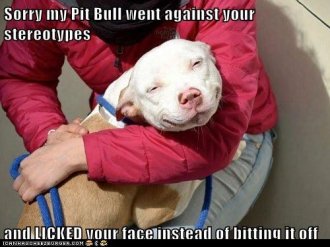 “Pit Bull” and “Apologist” were once terms that carried no pejorative connotations, but as their definitions have blurred their usage has shifted decidedly towards the negative. Pit Bulls are now the most maligned and problematic dog breed due to their popularity as a thug accessory, their use in dog fighting, their implication in human attacks, their ubiquity in shelters, and the resulting reputation which is highlighted in the media. Apologetics was once the art of defending an earnestly held position against criticism, but now it’s increasingly associated with public-relations hacks who defend the indefensible. For purposes of this post, let’s roll back our understanding of these two terms to a neutral state.

There’s no shortage of Pit Bull advocacy blogs and websites with content that could justly be called pit bull apologia. And yet, almost all of these authors are coming from a unique segment of the pit bull owning population, namely the rescue community who neither breeds nor fights pit bulls. This is a culture unto itself that in many ways is fighting against or cleaning up the mess left by other communities within the greater pit bull culture.

On the one hand, some people might be drawn to this breed in the hope of exploiting and perpetuating its vicious reputation. Such owners seek to use these dogs as status symbols of power and aggression and to reap the secondary benefit of an intimidating persona.

On the other hand, some people might see qualities in this breed that run contrary to its negative image and want to establish “traditional” human-dog relationships with their pit bulls. Nevertheless, they “inherit, ” and presumably have to contend with, adverse public perceptions of their pets.

Sociologically, this adverse perception can be considered a breed stigma where the animal itself has a “spoiled” or tainted identity and where owners may experience a courtesy stigma as a consequence of their association with, and ownership of, pit bulls.
…
In the face of social disapproval or even fear, stigmatized individuals seek to manage or respond to these adverse perceptions by relying on interpersonal strategies that minimize, neutralize, or evade their stigma.

If their dogs are status symbols, they are not valued as a totem of ferocity or power or violence, rather they are emblematic of more idealistic concerns: rescue, rehabilitation, redemption, second chances, countering stereotypes, and animal philanthropy.

That doesn’t mean there’s no room for criticism here; although well-intentioned, such idealism can still suffer from the less desirable motives associated with “slumming, ” “poverty pimping, ” and misguided do-goodery. Sometimes this group’s lack of real engagement opportunities with the thug culture, dog fighting culture, or the complex of breeding > selling/giving > dumping adolescent pit bulls in shelter “culture” makes them turn on their peers closer to home. Some of the most vehement attacks against suburban and rural hobby breeding and pure bred dog culture comes from the ardent white-knights in pit bull rescue who are looking for people to blame and smite.

I’ve often found myself at odds with the greater messages coming out of the pit bull apologist community; some of their arguments just don’t hold water in my view [and I’ll cover these in a later post] and some of their campaigns are less about the true problems in the greater pit bull world and more about attacking and jeopardizing purebred dog ownership and breeding. In trying to reconcile this community’s desire to help pit bulls but also analyze their shortcomings, I stumbled across a study that hasn’t gotten much traction on the pit bull apologist blogs. Despite almost universal coverage of published data like the Clifton Report (negative against pit bulls) and the American Temperament Test Society findings (generally positive data for pit bulls), one published survey has apparently no record of discussion among the most prominent pit bull advocates despite its contents being highly relevant to the authors themselves. 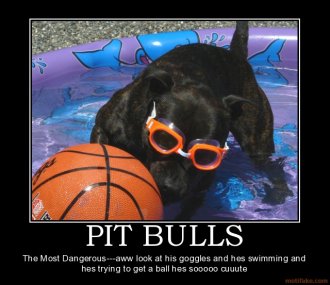 ABSTRACT
Ethnographic interviews were conducted with 28 pit bull “owners” to explore the sociological experience of having a dog with a negative image. Results indicate that the vast majority of respondents felt that these dogs were stigmatized because of their breed. Respondents made this conclusion because friends, family, and strangers were apprehensive in the presence of their dogs and because they made accusations about the breed’s viciousness and lack of predictability.

In the face of this stigma, respondents resorted to using a variety of interactional strategies to lessen the impact of this perception or prevent it from occurring. These strategies included passing their dogs as breeds other than pit bulls, denying that their behavior is biologically determined, debunking adverse media coverage, using humor, emphasizing counter-stereotypical behavior, avoiding stereotypical equipment or accessories, taking preventive measures, or becoming breed ambassadors.

This argument is quite popular and comes in many forms. Some apologists claim that since there is no single breed called “pit bull” that such designations are meaningless. Others will point out that there are too many breeds that can be confused with a pit bull or which belong to a class or landrace of bully breeds, some even cite the inability of genetic or picture tests to label these dogs correctly. Other manifestations of this same tactic are the “St. Francis Terrier, ” “he’s a boxer-mix, ” and other means to not use the term pit bull.

Confusion surrounding the multiple names used to refer to pit bulls, as well as the inconsistency with which they were accurately identified, offered respondents an opportunity to present their dogs in a better light simply by the way in which they referred to their breed. Many owners attempted to manage breed stigma by studiously avoiding the term pit bull and replacing it with a more neutral and respectable name such as American Staffordshire Terrier. By using this term, respondents passed their pit bull as a more idealized version of the breed. 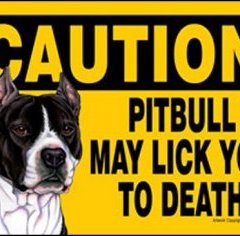 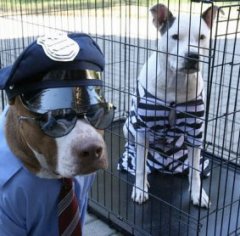 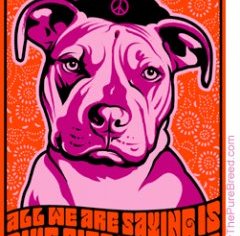 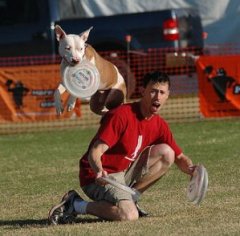