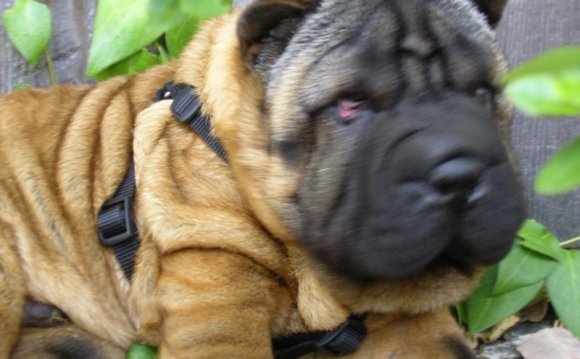 The researchers found the mutation by scanning the genomes of shar-peis that have the periodic fever disorder, and also those with differing degrees of wrinkles, and comparing them with other breeds of dogs that don't get the fever disease and have non-wrinkled skin.

They found what they think is the key to the fevers in a section of the genome near a gene ultimately responsible for making the protein hyaluronan, which causes the excessively saggy skin of the Shar-Pei. Hyaluronan is normally present in the skin and lubricates the animals' joints.

This area of interest contained many repeats of what's called a "regulator, " which determines if and how many copies of a gene are made into proteins. When the dogs had multiple copies of this regulator, they made more copies of the gene. This repeated regulator contributed to both the dogs' wrinkly skin and their likelihood of developing fever disease.

"I was not expecting it to be the same mutation, " said study researcher Kerstin Lindblad-Toh, of the Massachusetts-based Broad Institute of MIT and Harvard.

When this hyaluronan is damaged, it breaks up into many pieces that may resemble pieces of bacteria. The researchers hypothesize that the immune system reacts to these pieces as if they were foreigners, triggering inflammation and fever. It's possible that the increased amount of the hyaluronan in the skin of the Shar-Peis is what makes them more prone than other dog breeds to the fever diseases, researchers said.

"It's another wonderful story about how the population history of domestic dogs has allowed molecular insight into interesting and biomedically relevant phenotypes, " or characteristics, said Greg Barsh of Stanford University, who wasn't involved in the study.

While the study doesn't directly link the mutation in the dogs to what causes the disease, it's a start. "It's about as good a smoking gun as one can imagine, " Barsh told LiveScience. "But more work is going to be required to flush that out."

The research team is now looking to figure out how hyaluronan leads to the fever diseases, and hopes to develop a test that breeders and vets can use to determine a dog's susceptibility to the disease.

"We look forward to seeing what the relevance is for humans, " Lindblad-Toh told LiveScience. "We think it will be relevant."

Tonkey The Shar-Pei From Edmonton Is The Cutest Thing On ...