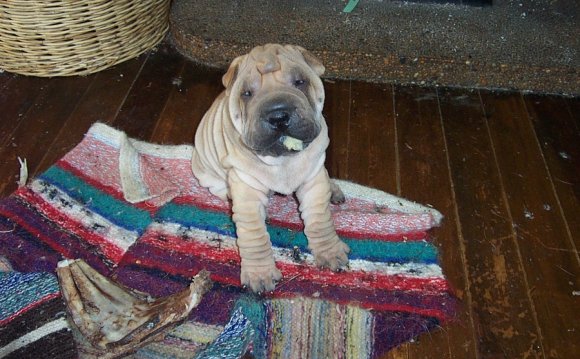 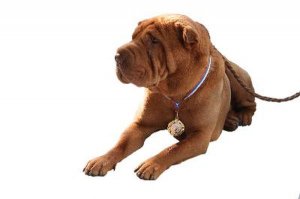 The breed standard has a critical role in Shar Pei eye problems.

Your Shar Pei's eyes probably are his weakest points. Genetics play a part in the poor pooch's eye problems, and his facial folds, which are an important part of his handsome appearance, unfortunately don't help. He may need eye surgery for two conditions, otherwise medication and care should help him.

A Shar Pei wouldn't be himself without his wrinkles. Plus, breed standards dictate the presence of facial folds. Unlike his owners, he starts off with a lot of wrinkles that gradually disappear as he reaches adulthood. Your Shar Pei's wrinkles are caused by a mutation that creates an abnormal amount of hyaluronan around his cells. This gel-like substance in the formation of his facial folds weakens his eyelids by making the edge of the eyelid weaker and the lid heavier. This is one factor in the development of entropion, a condition that shar peis are at a high risk to develop. Irritants in the environment are an additional potential cause. Vets and breed standard clubs agree that a dog who has been treated for entropion shouldn't breed as there is a significant hereditary factor in the condition.

As you'll notice, your Shar Pei's eyes are deep set and there is little support for his eyelids. Consequently, his eyelids, and his eyelashes, may roll inward. The eyelashes cause an irritation by scratching the eyeball. An irritant, such as dust, can cause the same problem. This is called "spastic entropion" and the vet treats it with opthalmic drops initially to relieve the discomfort. Tacking the eyelids back until the irritation clears is another treatment option. If eye tacking does not work, vets recommend surgery to correct the condition. Untreated entropion is very painful for your Shar Pei, and can lead to corneal ulcers and blindness. If your Shar Pei squints or has weepy eyes you should take him to the vet immediately.

Dog Training - How To Train A Shar Pei