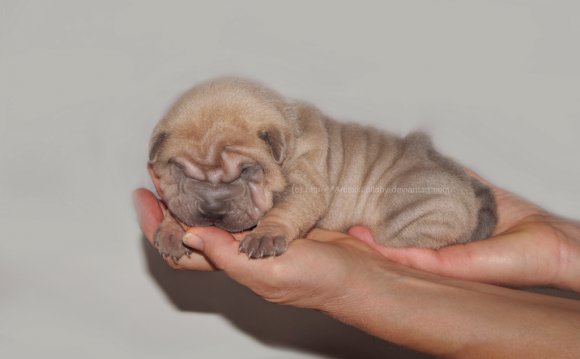 The Shar Pei or Chinese Shar-Pei is a breed of dog known for its distinctive features of deep wrinkles and a blue-black tongue. The breed derives from China. The name (É³Æ¤, pinyin: sh¨¡ p¨ª; English name probably derived from British spelling of Cantonese equivalent s¨¡ p¨¨ih) translates to "sand skin, " and refers to the texture of its short, rough coat. As puppies, Shar Pei have numerous wrinkles, but as they mature, these wrinkles disappear as they "grow into their skin". Shar Pei were once named as one of the world's rarest dog breeds by Time magazine and the Guinness Book of World Records, and the American Kennel Club did not recognize the breed until 1991. 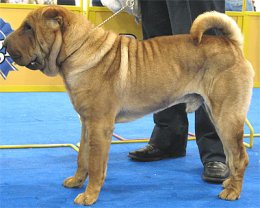 The origin of the Chinese Shar-Pei can be traced to the province of Kwun Tung and has for centuries existed in the southern provinces of China. These dogs helped their peasant masters in various tasks such as herding cattle, guarding the home and family, and have proven themselves to be qualified hunters of "wild game, usually wild pigs."

Appearance
Small, triangular ears, a muzzle shaped like that of a hippopotamus, and a high-set tail also give the Shar Pei a unique look. For show standard, "the tail is thick and round at the base, tapering to a fine point" (AKC standard February 28, 1998).

Colors
Shar Pei come in many different colors such as fawn, red (rose), sand, cream, black, lilac and blue. They resemble the Chow Chow due to having the same blue-black tongue. There are over sixteen recognized colors in AKC. The coat must be solid in color and any Shar-Pei with a "flowered coat" (spotted) or black and tan in coloration (i.e. German Shepherd) is a disqualification. Colors include black, cream, fawn, red-fawn, red, sable, apricot, chocolate, isabella, and blue. The nose may be black or brick (pink with black), with or without a black mask. A Shar-Pei can also have what is called a "dilute" coloration. Meaning the nose, nails and anus of the dog is the same color as the coat, (i.e. chocolate coat with chocolate nose, nails and anus). All of these color variations are acceptable and beautiful, but the coat color must be solid and well blended throughout the whole body of the dog.

Coat
Shar Pei puppies, showing the greater amount of wrinkles.Shar Pei comes in three different coat types; horse, brush and bear coat. The unusual horse-coat is rough to the touch, extremely prickly and off-standing and is closer to the original Shar Pei breed in appearance and coat type than the Brush or Bear Coat. This coat is fairly prickly, and can be rough or irritating when petting in the opposite direction of the fur. The Horse Coat is generally thought to be more active and predisposed to dominant behaviour than the Brush Coat. The brush-coated variety have slightly longer hair and a smoother feel to them. The...