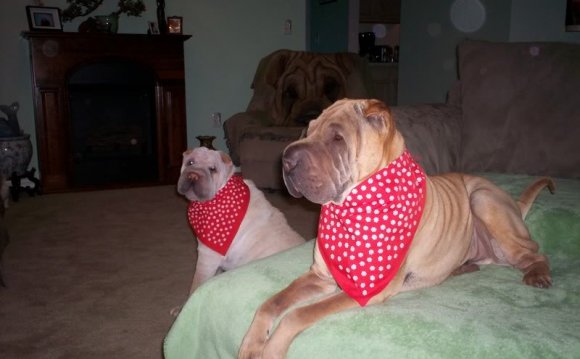 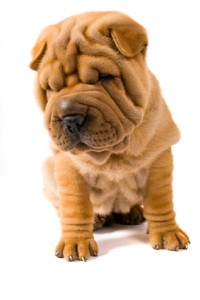 How did the Shar-Pei get his wrinkly skin? The question sounds like the beginning of one of Kipling’s “Just So” stories, but this and other questions were the subject of a recent genetics study. What gives some breeds their Lilliputian legs and others their lengthy limbs? Why do some breeds have docile dispositions and others tenacious temperaments? The answers may lie in their doggy genes.

This study is not the first in canine genetics, and several genes have already been associated with size (IGFI), coat type (RSPO2, FGF5, KRT71), coat color (MITF, CBD103), short limbs (FGF4), snub noses (THBS2), and wrinkly skin (HAS2). This new study, however, is different because the researchers developed a new DNA chip that analyzes the canine genome in higher resolution, and they used it to focus on behavioural traits as well as physical traits Altogether, the international group of scientists led by Matthew Webster — spanning France, Sweden, Finland, Spain, Denmark, and the United States — looked at the genetics of 509 dogs from 46 different breeds.Although dogs were domesticated from wolves over 15, 000 years ago, only in the last few centuries did dogs fan out into the distinct breeds we have today. Normally evolution is propelled by survival fitness; animals that survive better reproduce better, passing on their genetics and unique traits. In the case of dogs, however, the selective pressure was artificial. Instead of fitness being based on increased survival in the wild, dogs were bred for size, disposition, and other traits that were deemed desirable by their owners.

Figure 1 of the 2011 PLoS Genetics paper clusters 509 dogs based on their genetic similarity. In this figure, dogs that are genetically similar to each other are grouped together, and, not surprisingly, this grouping corresponds quite well with breed (dogs of the same breed are grouped together). Some breeds do cluster together (for instance, all the retrievers are clustered together, as are the all the spaniels), but the relatively long branches connecting dogs within the same breed and the relatively short branches connecting the different breeds together is consistent with breeds which originated from a common dog gene pool long ago and have remained quite distinct. Image from Vaysse A, et al. PLoS Genet. (2011) vol. 7 iss. 10 pp. e1002316.

This study by Webster and his colleagues suggests that the artificial evolution of dogs into their distinct breeds was very fast and very directed: even breeds within typically recognized subgroups (e.g. retrievers, spaniels, setters, and terriers) diverged from each other quite early. For example, Golden Retrievers and Labrador Retrievers are now quite genetically distinct after only a few centuries of breeding. A striking figure from their paper illustrates this concept.

Webster’s team further showed that some well-recognized dog traits can be traced to specific genetic variations, even across breeds. For instance, they found a novel association between a region on chromosome 1 and curly tails across several breeds. In addition, ear morphology (pricked ears vs. dropped ears), size, and “boldness” of disposition (as measured by the Swedish Kennel Club) are all associated with genetic variation within one section of chromosome 10. They also found that the boldness trait was associated with the other two traits: all of the small, pricked-eared breeds studied were categorized as “bold” and all of the large, drop-eared breeds were categorized as “non-bold, ” except for the Bernese Mountain Dog. The researchers suggest that breeders may have optimized for certain ear morphologies, sizes, and/or degrees of boldness, thus putting selective pressure on this region of chromosome 10.In addition to traits selected for in multiple breeds, the study also addressed a handful of more unusual traits that occur in only one or two breeds. Confirming earlier findings, Webster’s results suggest that the real story behind the Shar-Pei’s wrinkled skin may lie with mutations near the HAS2 gene on chromosome 13. Likewise, their findings support the previously held hypothesis that the Dachshund’s short limbs may be due to mutations near the FGF4 gene on chromosome 18. These genetic regions are quite distinct from the corresponding regions in other breeds, representing a signal for active selection.The delightfully friendly disposition of the Golden Retriever, the comically short gait of the Dachshund, and the adorably furrowed hide of the Shar-Pei are no accident. These and the many other charming (and sometimes useful) attributes exhibited by modern breeds are the result of strong selective pressures, as this work illustrates. Dogs perfectly suit humans because they were bred to perfectly suit us. Of course the dog is “man’s best friend” — with such a pedigree, how could it be anything else?